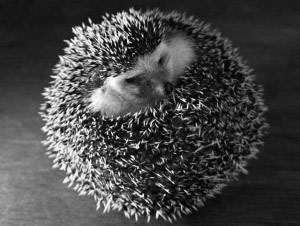 ‘A fragment, like a small work of art, has to be entirely isolated from the surrounding world and complete in itself like a hedgehog’, Freidrich Schlegel, Athaneum Fragment 206 [pp.43]

The Literary Absolute by Jean-Luc Nancy and Phillippe Lacoue-Labarthe ‘traces the emergence of the modern conception of Literature’ in Jena Romanticism. Their ‘fragmentary’ model of literature – as the production of it’s own theory – stands in relation to the development of a Post-Kantian conception of philosophy as the total and reflective auto-production [autopoiesis, literally self production] of the thinking subject in the work of art.’ [Book jacket]. Nancy and Labarthe also hightlight the inadequacy of the term Romanticism [as retrospective label] since ‘what is at stake in Jena […] is the first approximation of theoretical romanticism.’ [pp.2].

They elaborate this essence as ‘precisely what determines the age we live in as the critical age par excellence or, in other words, as the “age” (almost two hundred years old, after all) in which literature-or whatever one wishes to call it-devotes itself exclusively to the search for its own identity, taking with it all or part of philosophy and several sciences (curiously referred to as the humanities) and charting the space of what we now refer to, using a word of which the romantics were particularly fond, as theory. Thus it is not difficult to arrive at the derivatives of these romantic texts, which still delimit our horizon.’ [1] For Maurice Blanchot [literary critic and author whose writing enacts a critical discourse on and via the fragment] Jena Romanticism marks the moment ‘[the origin] where the question of literature becomes a question to philosophy rather than of philosophy.’ [2]. For Blanchot the French Symbolist poet Mallarmé’s textual, spatial practice was central to this thinking [as it was for Post-Structuralism in general, see also the ‘Fragmentary Demand’, Nancy].

Friedrich Schlegel, member of the Jena Romantics along with Novalis, did not formally theorise the Romantic fragment however, the Athaneum Fragment 116 [see Philosophical Fragments, trans. by Firchow, foreword by Rodolphe Gasché] is largely considered to contain the ‘concept’ of ‘Romantic’ poetry or universal ‘poesy’ marking the critical turn in the history of Philosophy and Literature [pp.3].’The true critic is an author to the second power’. ‘Literature and criticism’, are thus co-extensive, two functions of the same concept of Literature [ Schlegel pp.xviii].

For the Jena Romantics and in particular Freidrich Schlegel the form of this auto-production par excellence was the fragment [although this was not the only type of writing the group practiced and only one collection strove ‘to be absolutely self-posited’, the Athenaeum Fragments, pp.40]. ‘In its fragmentary work, literature is determined as the productive capacity of poeisis, and manifests the synthetic that lies behind or before each of its particular manifestations.’ [pp.xvi] In other words the part in the whole and the whole in the part. Therefore circumscribed within the logic of poetics [and the concept of a manifest performativity] the works becoming is constitutive of the works being and neither category is reducible to the other, ‘the essence of the fragment is individuation’ [pp.43]. This differs from the historical conception of the  fragment [i.e the Pre-Socratics] which is generally posited as an incomplete part of an original whole.

Although the fragment manifests an ‘essential incompletion and lack of unity’  it is paradoxically understood in its detached and incomplete form to ‘correspond exactly to completion and totality’. ‘To write the fragment is to right fragments, thus individuality and ‘multiplicity is inherent’ [pp.45].If we extrapolate one of Nancy’s other concepts for our purpose the fragment can perhaps be thought as a ‘being-singular-plural’. [3] The Athenaeum subscribes to this concept of community by way of its ‘organic character’ and it’s collective writing, a self effacing authorial gesture in favour of the taxonomy of  ‘symphilosophy’ or ‘sympoetry’  and the ‘universality of the vision of the whole’. [pp.45]

This territory is complex because of the wealth of contexts that accompany the fragment including the Ancient, the Romantic, the Modern, the Post Modern, the literary discourse on the fragment, the critical or meta-discourse on the fragment i.e Blanchot and the Post-Structuralists. And I have not even yet mentioned Walter Benjamin’s Trauerspiel, The Origin of German Tragic Drama, and the allegorical ‘surplus of signification and its overtly visual form’ [4]. Nor have I mentioned Benjamin’s magnus opus in the Baroque performative mode of the Arcades Project, the ‘piling up’ of details or the Denkbilder [or fragmentary thought-images] of the Frankfurt School. It seems to me that this is less fragment and more mass. Of course I only have 10,000 words and it would most likely  be possible to simply write 10,000 adjectives about the fragment. And now I have to stop [but at least I have started] because it is ridiculously late [1.32 am] and I am starting to get fragments on the brain.