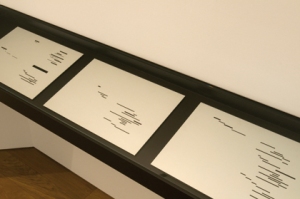 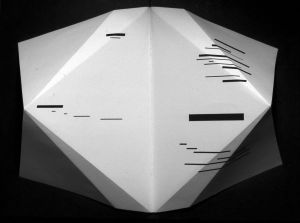 In 1969 Broodthaers re-staged Mallarme’s Un coup de des, to which Broodthaers added the title ‘(image)’. Replacing the lines of Mallarme’s poem with black rectangular blocks positioned and sized according to Mallarme’s instruction of the poem Broodthaers punctuates the space of the oversized page with a cool clinicism and translates the poem into a field of hard edged precision and fixed geometric forms.

Taking the line as an isolated visual unit, Broodthaers adheres to Mallarme’s injunction in ‘The Book: A Spritual Instrument. ‘Let us have no more of those successive, incessant back and forth motions of our eyes, tracking from one line to the next and beginning all over again. ‘(image)’ emphasizes the spatial dimensions of language while eliminating its reference. With this thorough illegibility, Broodthaers thus establishes what Jaques Derrida would call ‘a text, that is a readability without a signified.’

Robert Smithson also habitually equated  words and rocks with a geololinguistics predicated on the realization that written language is an object with the same brute physicality of stone. Works such as the visual poem A Heap of Language (1966) and the ‘geophotographic fiction’ Strata 1970 embody this belief that […] writing should generate ideas into matter. Smithson reiterates elsewhere that he was interested in language as a material entity, later explaining that: ‘My sense of language is that it is matter and not ideas – i.e ‘printed matter.’