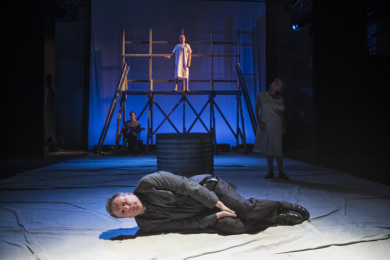 The War in Heaven, Sam Shepard

Whilst the non resolution of The Holy Ghostly was resolved powerfully both in terms of the scenography, the visual imagery and the performance by John Chancer this did not translate successfully in The War in Heaven which Usher describes as “a moving plea from both a fallen angel and a man struggling to be heard once more.” I would argue important contextual information was missing for the audience in the interpretation of this play especially following the The Holy Ghostly since the full title is The War in Heaven: Angel’s Monologue. Whilst The Animal You and The Holy Ghostly were connected conceptually and through the characters there was absolutely no connection to the final instalment except the fact that it was Sam Shepard’s work.

As a general rule visually I  found the scene to be completely incoherent, which in itself is not a dismissal of the aesthetic, sculptural and conceptual qualities of this kind of work and its inherent complexities however it felt largely unresolved from a formal perspective. There was simply no connection between the performers in space and the set. Clearly narrative and visual incoherence are  conceptual strategies and the production appeared to commit to this concept as an overall architecture to the work. The play itself is on many levels trying to find form through language within a stream of consciousness speech but my feeling is it didn’t go far enough and was therefore caught somewhere between the concept and the execution. If this disconnection is a formal aspect of the work it is possible to resolve the visually incoherent formally but there seemed to be a failure to commit to the intention and make it concrete.

John Chancer, who had so far been the highlight of the production, and was excellent holding the stage with his presence and embodiment of ‘old Pop’ in The Holy Ghostly suddenly did something strange, ironically he started to act. Prior to this Chancer gave an exceptional performance acting like a man who wasn’t acting;  being and not doing and his ‘acting’ in The War in Heaven completely broke the spell. Since he was the only presence among the actors casting any spells this failure to commit to the intention made it practically impossible as an audience member to suspend disbelief and in turn act like someone who wasn’t aware they were watching theatre. The War in Heaven took an awfully long time to achieve little and get nowhere relatively speaking (conceptually this is clearly at the heart of this work) but since the spell for me had been broken  I felt like I was either receiving Beckett on a really bad day or witnessing  the painful resurrection and metaphorical death of the avant-garde. Coincidentally this metaphor played out unintentionally in the performance whilst an image of the sky was projected onto the screen behind Jack Tarlton, wearing a white hospital gown atop of the billboard (the backdrop to the otherwise uber minimal set).

The finale tried to replicate the powerful resolution in The Holy Ghostly which was perhaps a mistake and was inhibited by the use of a prop, large blackened Angels wings which John Chancer spreads atop of the billboard. I found this particularly awkward and it affected my reading of other aspects of the the set. A large oil drum had been used as a placeholder doubling as a coffin and the search for a soul. I found this metaphor interesting until the prop was pulled out of it and then began to wonder if that was the only reason it was there. This prop was then inserted (with difficulty) into the back of Chancer’s jacket. As a visual artist I felt this could have been achieved perhaps more subliminally and subtley with a projection, a suggestion of form while the actor faded into the background image at the end. The last act in the Sam Shepard Roadshow, in my opinion, is not yet fully resolved.

Finally  whilst The Holy Ghostly, and I would argue least successful act in CHORALE, incorporated Joseph Chaikin’s ‘transcended’ method any radical potential this technique may contain was neutralised by its adoption as an affectation. Whilst the use and employment of this language and figures of speech in the final act were indeed challenging and performatively complex it fell flat as an exploration haunted as it was by the spectre of Joseph Chaikin. Considering the theme of hauntology that runs throughout Shepard’s writing this might have been intentional and was certainly conceptually appropriate but having witnessed Joseph Chaikin’s performance in the films Savage/Love and Tongues instead I was reminded of Robert Downey Junior’s famous dictum in Tropic Thunder as Sgt. Lincoln Osiris “I’m a dude disguised as a dude playing another dude.” Joseph Chaikin was not acting aphasic, he was aphasic.

As opposed to  inhabiting this form as a mechanism to interrogate its potentiality to communicate in the now it felt stilted and bordered on parody and pastiche instead of exhibiting the pathos that the company clearly felt towards Sam Shepard’s work and the work of Joseph Chaikin.  It would have been far better if the actors had attempted to find their own form with this method in this context. Since their own performances were exposed in comparison to Chaikin they failed to live up to his performance. Perhaps they should have taken a cue from their own workshop during the production where one exercise provided by the Director Simon Usher was to imagine you were a wild spider crying in the wilderness. To reformulate Chaikin’s method whilst occupying this existential and conceptual framework would have more forcefully and accurately enabled the actors to embody the existential highway, redolent of Beckett, at the heart of Sam Shepherd’s ouvre.