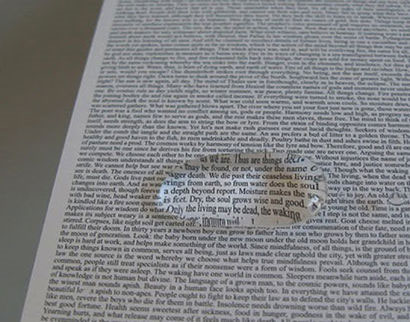 Browsing the fragments of Early Greek Philosophy by Heraclitus, Empedocles and Diogenes et al I have made some startling and humorous discoveries of the thoughts of Heraclitus inscribed here for your delectation:

‘Exhalations are given off by the earth and the sea, some of them bright and pure, others dark. Fire is increased by the bright exhalations, moisture by the others. He does not indicate what the surrounding heaven is like. But there are bowls in it, their hollow side turned toward us […] The sun and the moon are eclipsed when the bowls turn upwards. The moon’s monthly changes of shape come about as its bowl gradually turns.

and here in this combination of the comic and the tragic:

‘In the end he became a misanthrope, leaving the city where he fed on plants and herbs. Because of this he contracted dropsy and returned to the town. He asked the doctors in his riddling fashion if they could change a rainstorm into a drought. When they failed to understand him, he buried himself in a byre [barn, cowshed], hoping that the dropsy would be vaporized by the heat of the dung. But he met with no success even by this means and died at the age of sixty.’